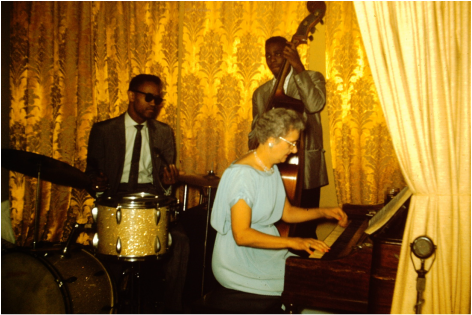 Roots
Where does my inspiration come from?  While I can never be sure, I'd say my grandmother, Frances Fessenden Borgmann had something to do with it.  Though we lived far enough away that we didn't see each other often, every time I saw her music was somehow involved.  Here's a photo of her playing, sometime in the 50s.  Sadly, I don't have any recordings, but she could really play! 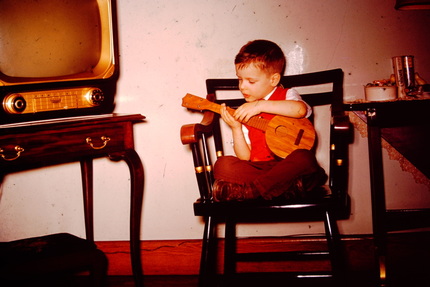 Gladys Lowrey
I don't have a photo of my first piano teacher - Gladys Lowrey.  She was certainly a taskmaster when it came to my lessons.  Initially she would play the lessons for me, then I would play them.  That lasted until she realized I wasn't reading the music - simply listening and replaying the lessons by ear.  That's when I had to start working.

Over the 12 or so years, I had varying levels of success, depending (surprise) on how hard I worked at it.  Every once in awhile I'll come across an old lesson book where she'd get out her red pencil and let me have it!  I was captivated by Dave Brubeck recordings, and wanted to play everything from the Time Out album.  Let's just say that those songs (and others) weren't in keeping with the lesson plan.  We finally worked out a compromise, and many of those challenging tunes became additional fodder for lessons. 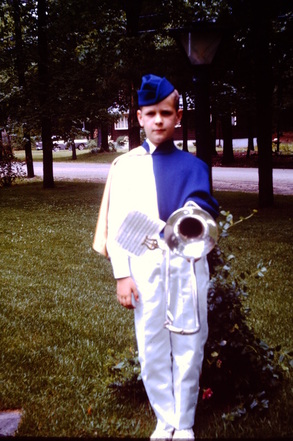 The Littleton Massachusetts school system had a great music program, with everything from individual lessons, to band, chorus, brass choir, to music theory....  Wow - it was incredible! The music department even allowed my group (yes, I had a trio back then) to perform in school concerts.

Several of my classmates have gone on to careers in music, and I'd bet they'd tell you that Littleton's music program was a big part of their foundation as well.

Yes, I played trombone then.  I still have one, but haven't played it in years. 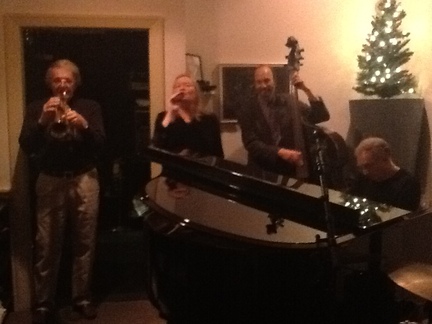 Bob on trumpet, at Lyric (with Ann Austin, Laird Boles and Ted Jelinek)
Back then, Bob Kidd (Mr. Kidd at that time, of course), was a prime factor in my continued development.  He even let me borrow his personal LPs (vinyl, for the unanointed - oh yes - now they're back!) and pointed me in many new directions - Denny Zeitlin, and Mose Allison, for example.  My musical spirit guide, if you will.

When I returned to Cape Cod, I was amazed to find that he was here as well, still out playing great music.  The whole community is saddened by his recent passing. 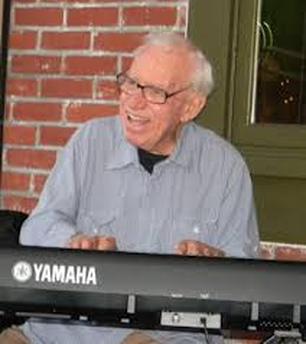 In my senior year of high school, we moved to Chatham, on Cape Cod.  Lucky for me, Chatham had a wonderful combination of music programs under the direction of Bob Hayes.

Bob was responsible for my first professional gig in the summer of 1971, where I took over playing piano in his band for the summer at the Blue Water Resort in Bass River.  Other band members included Frank Texeira (guitar), and Joe Lipari (vocals).

Bob's lasting legacy continues to inspire many singers and musicians.  I consider myself fortunate to be a member of that group.  He invited me to play at his most recent birthdays, and this year I'll be playing at what would have been his 90th!  Thank you, Bob, for all the ways you've touched our lives.​ 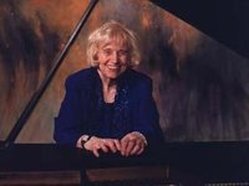 Other important influences include renowned pianists Marie Marcus, and her son Billy.  Marie would always play "Little Rock Getaway" whenever I was in the audience.

At the Cape Cod Conservatory, I studied jazz piano with Billy. I look back on those afternoons fondly as we'd spend the afternoon playing two pianos off each other.  I just can't put into words how these opportunities have expanded my vision and technique over the years.
Thank you for supporting the arts on Cape Cod! All content Copyright © Mark Borgmann Music - 2010-2023